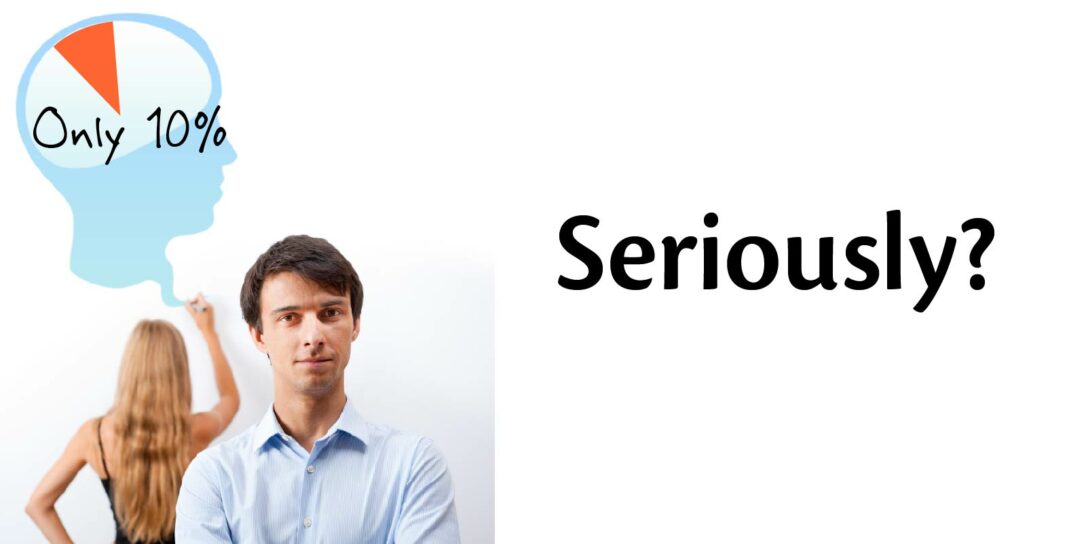 When aiming to discover more about the field of neuroscience and cognitive functioning, there is a plethora of resources available — some being more accurate than others. Although there are plenty of informative, highly reliable resources available, there are also a lot of misleading facts.

False claims have developed from past research time and time again. As the truth is stretched, ‘neuromyths’ develop, making their way into the education system and marketplace. Regardless of one’s motive, these claims are misleading and can result in a number of dangerous effects.

As the name implies, a neuromyth is anything that misrepresents the field of neuroscience, education, cognition, and overall brain health. From fads to frauds, these myths are misconceptions that do not reflect accurate details. In some cases, they’re flat out lies, created in order to push publicity or online traffic.

The majority of cases, however, fall into the category of being ‘misunderstood.’ In turn, misconceptions have developed, creating fictional facts that no longer have any scientific basis. After all, science is forever evolving and although information may be inaccurate at one point in time, it’s not necessarily deliberate — it’s a means to discover more.

There is no doubt that the human brain is highly complex, leading to a vast array of remarkable discoveries. With so much information online, the line between fiction and reality has been blurred along the way. Details within the research are often twisted or misunderstood, leading to a range of misconceptions.

In some cases, the truth is bent in order to accommodate education; in others, unqualified individuals and organizations make claims in order to push their own products or ideas. Regardless, these neuromyths create a certain level of danger, threatening the true advancement of neuroscience and learning capacity.

Why should we care about neuromyths?

Perhaps you already know which common neuromyths are false — your right hemisphere is responsible for creativity; we only use 10 percent of our brain; drugs create holes in the brain; and the list goes one and on. Sound familiar?

If so, you may think, what effect can these neuromyths truly have. Can they actually cause harm?

The truth is, educators and parents, are often eager to teach their pupils and children. When certain neuromyths become so well-known, it can be tempting not to take this information seriously, passing it on without any supporting evidence. Within a number of studies, it’s been found that teachers do, in fact, often believe these misconceptions.

Within one 2012 study, published in Frontiers in Psychology, it was found that when testing 242 primary and secondary teachers, 49 percent of the neuromyths presented were believed to be true. It was concluded that on average, teachers may find it challenging to distinguish between scientific facts and pseudoscience.

Not only may the information itself be false, but their overall teaching style can be problematic. This is because many neuromyths have caused educators to believe there are optimal learning styles, when there is no evidence to suggest this. Let’s take the idea of hemispheric dominance, for example, resulting in individual learning differences.

There’s just one problem — there’s no scientific evidence that supports this popular neuromyth. After analyzing over 1000 brains in 2013, the data did not support the idea that some individuals showcase a hemispheric dominance. So why are these concepts still being pushed and why does it matter?

The truth is, neuromyths are leading to time and money being wasted at an alarming rate, as schools and educational programs invest in interventions that are lacking scientific evidence. Not only are these programs expensive, but they waste time — time that could be spent on real education.

Are these educators being malicious? Of course not — they’re simply teaching what they know and this is the issue. Neuromyths have become so relatable and well-known, it’s hard to ‘erase’ these concepts as new research emerges. Scientific discovery is forever expanding and as we learn more, old theories are disproven, but in many cases, these myths remain strong.

Since the human brain is so highly complex, new discoveries are being made each and every day, helping us explain neural functioning, degenerative cognitive disease, and other critical areas of research. The longer and stronger these myths remain, the harder it will be to ‘re-train’ society’s understanding.

Not only does this threaten education, but false claims often come with a price tag, as unsupported claims are used to push products. There are plenty of people cashing in on common neuromyths, with consumers not knowing that they’re potentially being taken advantage of.

What can we do about circulating neuromyths?

In order to make positive changes, awareness is key. Within this series, we will highlight a wide range of neuromyths, aiming to provide more accurate and reliable information. By increasing awareness, neuromyths that have been engrained into the public conscience, will become more easily recognized as myths and misconceptions, instead of factual content.

Within this series, the main goal is to provide accurate information to those who are interested in the field of neuroscience and cognitive functioning, but may not be an expert in these fields. We will focus on where these myths came from and how the truth has been stretched and misrepresented.

In many cases, these myths do stem from scientific research, yet the findings are either misinterpreted or oversimplified in order to make the information easier to teach and understand. Along this journey, we’ll highlight the most popular neuromyths, separating fact from fiction.

Join us, as we learn, develop and grow within the field of neuroscience, brain health, and education Our aim is remove doubt — we want to dispel the most common neuromyths so that public awareness evolves with modern science and research.

This site uses Akismet to reduce spam. Learn how your comment data is processed.